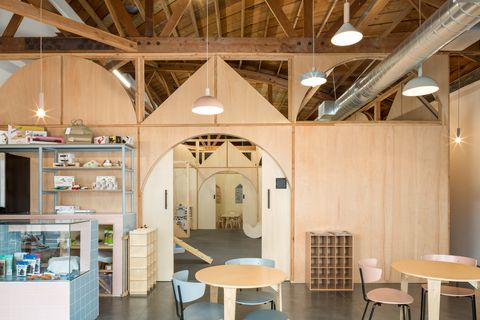 A kids’ play area is included in this co-working space in Santa Monica designed by Spanish firm Zooco Estudio, so its members can bring their children to work.

Big and Tiny is among the first co-working facilities in the US to offer onsite childcare. The company was founded by an entrepreneur who is a mother with the aim to empower parents by helping them integrate their personal and professional lives.

The facility occupies a 2,100-square-foot (195-square-metre) storefront space in the coastal Californian city. Designed with both adults and kids in mind, it is intended to foster “productivity, creativity and community”.

It features a high ceiling with a series of wood-bow trusses, which Zooco Estudio used as an organisational device. Three separate areas were established – a cafe-cum-shop, a kids’ play area and a work zone.

The trusses also informed the design of plywood partitions and certain pieces of decor.

“Using the original truss ceiling as an example of a universal geometric language, we created a repetitive modular and constructive system that reminds us of a puzzle,” said Zooco Estudio in a project description.

“This adaptable system creates appealing elevations in all the three areas.”

The front zone contains a coffee bar and a boutique with kid-themed merchandise. Visitors can sit at round wooden tables and pastel-hued chairs.

Hanging on the walls are triangular and semi-circular iron racks. The front area also features tile-clad blocks that are used to form shelving and a display counter.

“The modular and movable cubes are made out of 10-by-10 ceramic tiles in pink and blue, which is the brand’s colour palette,” the team said.

“This offers the flexibility to configure the space according to different needs.”

Situated behind the cafe and shop is the children’s area, called Tinyland, which aims to offer “purposefully selected sustainable toys to stimulate imaginative play”.

A playground consists of wooden structures such as a ball pit, a slide and a small stage. The room also has a studio space where kids can work on art projects and take classes. Concrete flooring is covered with an eco-foam material.

The rear zone houses the co-working area for adults. The room has Scandinavian-style office furniture from Normann Copenhagen, along with a soundproof phone booth from Room.

Zooco Estudio – which has offices in Spanish cities Madrid and Santander – was founded by architects Miguel Crespo Picot, Javier Guzmán Benito and Sixto Martín Martínez. Other projects by the studio include a complex of granite-clad buildings that form an art centre in the city of Verín.

Co-working spaces have been on the rise in recent years as working lifestyles become increasingly digital and nomadic.

As the industry becomes more competitive, many are offering tailored experiences. Examples include a women-only workspace and a members’ club geared towards celebrities and famous professionals.

Photography is by Aaron & Jon Photographers.

Be the first to get updates about our new location in Battery Park, NYC